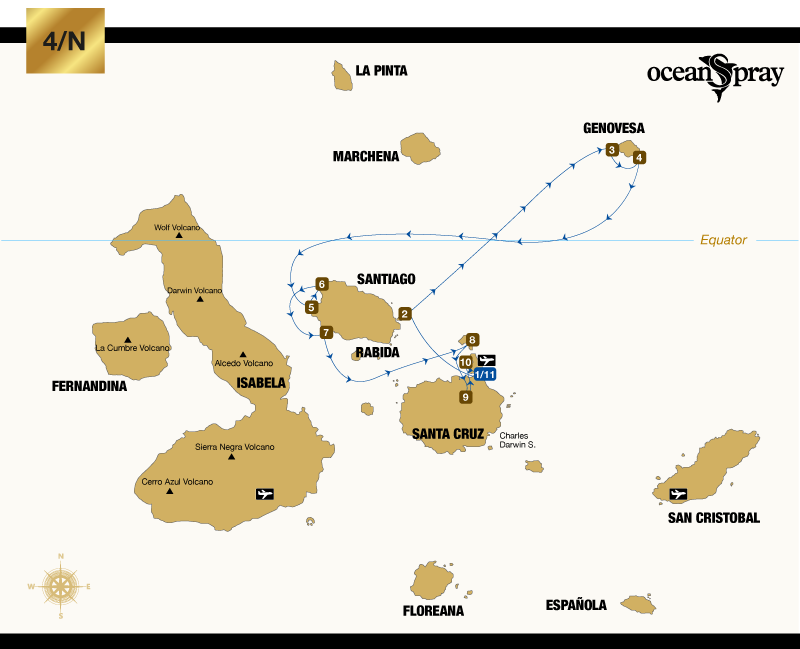 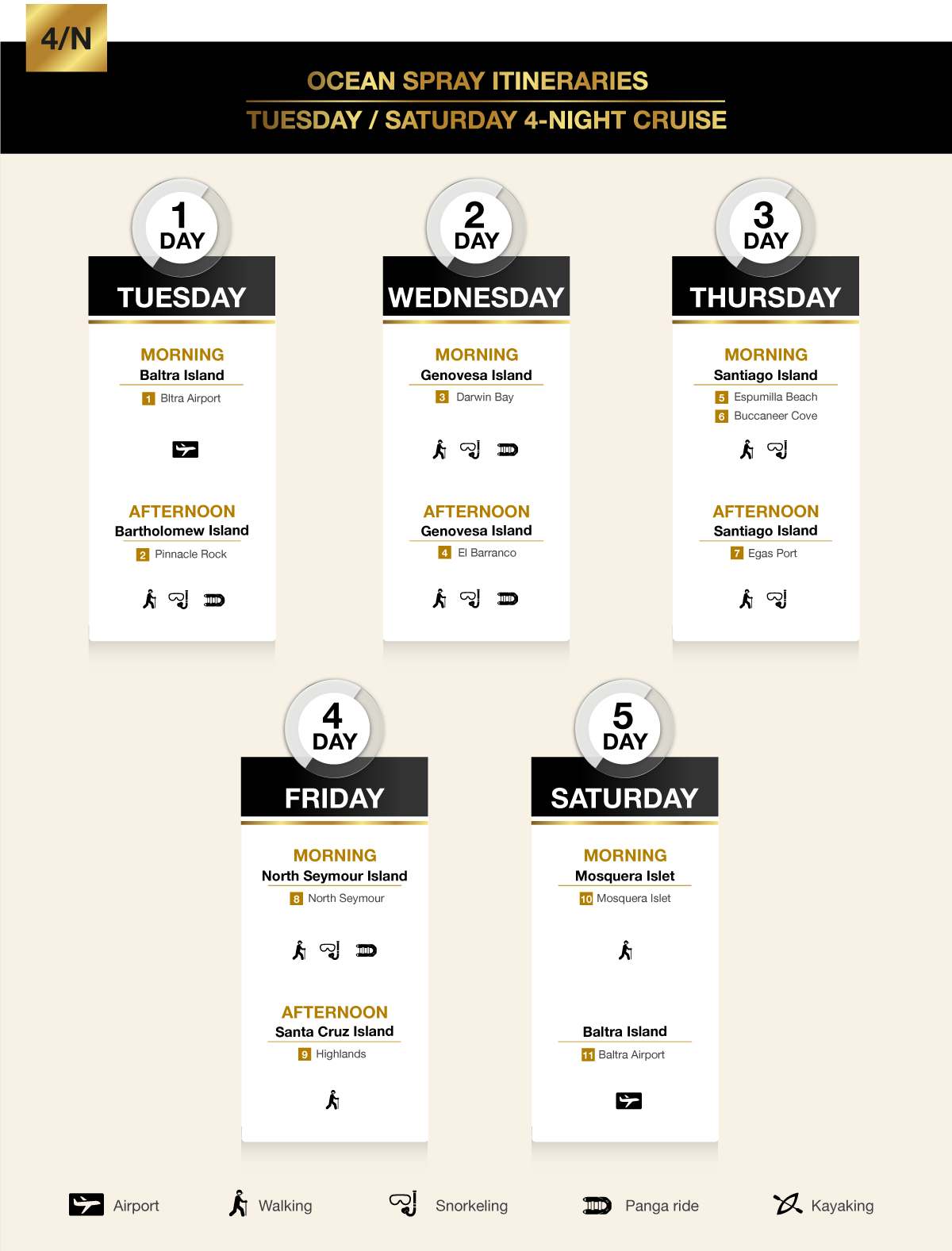 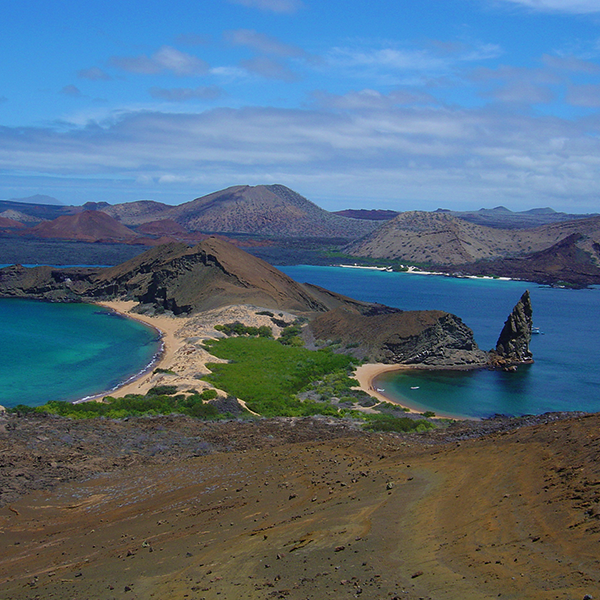 AM: Upon arrival, reception and assistance at the airport, transfer from Baltra Airport to the M/C Ocean Spray.

Pinnacle Rock is a volcanic cone formed by magma expelled by an underwater volcano. The sea cooled the hot lava and as it exploded from contact, the pieces formed together this huge rock of many, many layers of basalt. The huge rock also has a beach where a small population of green sea turtles will nest during breeding season. Galapagos penguins gather here and swimming can offer beautiful sights of colorful schools of fish and curious sea lions. 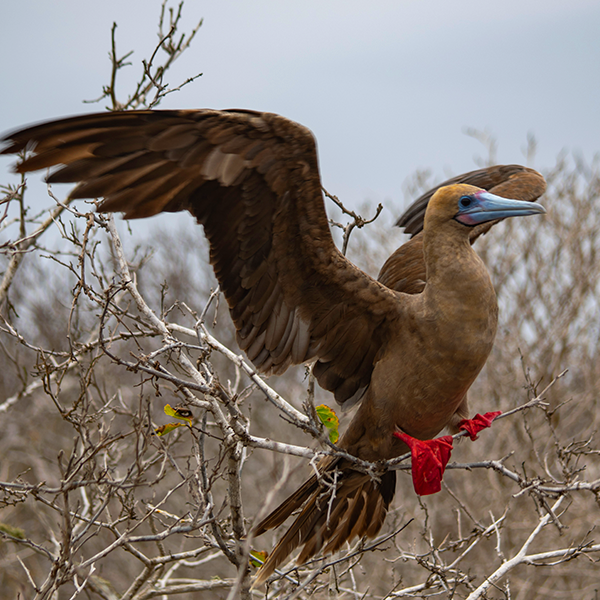 Darwin Bay used to be a shield volcano, now you can see where one of the sides of its caldera collapsed after hundreds of years of erosion.  It is known for the wide variety of birds that can be seen.  Over 20,000 red-footed boobies are estimated to call this island home within the trees and bushes of Genovesa Island.

In English, this visitor site is also known as Prince Phillip’s Steps.  It leads to a rocky path up a cliff that rewards guests with a remarkable view.  It is also home to a Palo Santo forest that is home to the nesting red-footed boobies and other shorebirds. 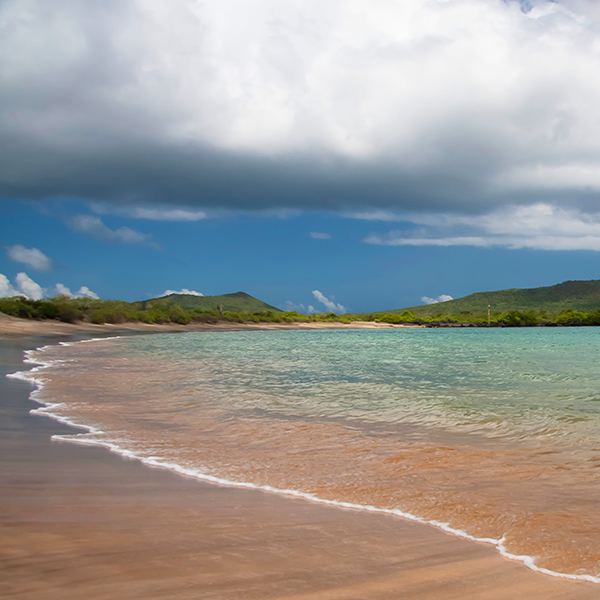 As the second Island Charles Darwin discovered, it was originally named after King James of England.  Buccaneer Cove is an excellent opportunity for snorkeling and was once a refuge for passing sailors and pirates.  The underwater formations provide an amazing home for the many different tropical species of fish that can be found here.

Egas port is also known as James Bay, home to quick-footed Galapagos lava lizards.  There are grottos and tide pools housing all kinds of different marine species.  This is also one of the best snorkeling sites in the Galapagos. 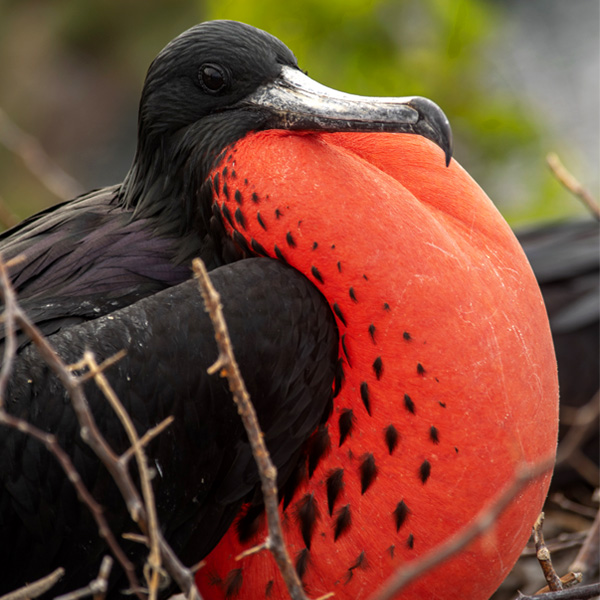 The island was named after English nobleman Lord Hugh Seymour. Formed by uplifted submarine lava, the island is home to a huge colony of about 2,500 land iguanas and large populations of sea lions, blue-footed boobies, common noddies, and frigatebirds. Along the coast, it is possible to see land and marine iguanas and the biggest colony of Magnificent Frigatebirds.

The Highlands of Santa Cruz is a very interesting site due to the rich wildlife, hills, ferns, volcanoes and lava tubes present. Exploring the lava tubes is a surreal and unique experience. Here you can see all the different agricultural zones that are present in the Galapagos in one place. The variety of birds makes this a bird watchers delight. 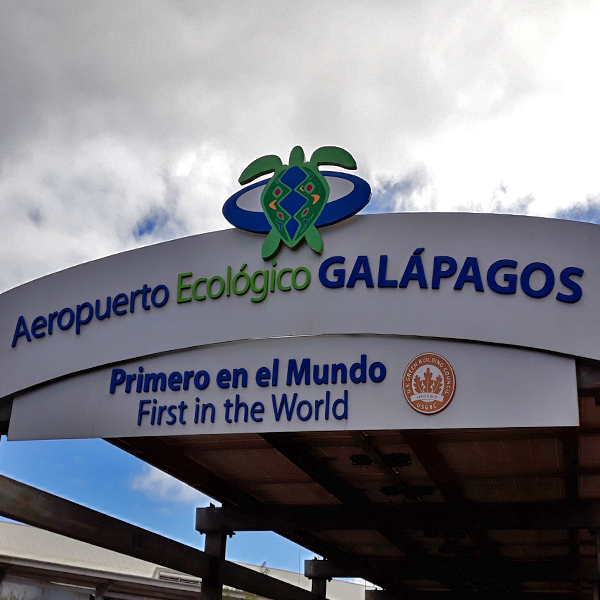 This visitor site is located between the islands of Baltra and North Seymour. It is a reef of rocks and coral (the result of an uprising) and a great white sand beach. Its narrowest width reaches about 160 meters and has an estimated length of 600 meters. In most of the perimeter there is a base of lava rocks, as evidence of the lava uprising, except in the southwest side where the landing occurs. This island has one of the largest populations of sea lions. You can also observe several species of shorebirds. There have been occasional reports at this site of Orcas (Orcinus orca) feeding on sea lions.

After this last visit, transfer to Baltra airport for your return flight to mainland Ecuador.

Assistance and farewell at the airport.

* Itineraries are subject to change without prior notice due to weather conditions, National Park regulations, emergencies on board or any unforeseen situation.